Wondering if the Sole E95 Elliptical is the right one for you? In this guide, we do a deep dive on this popular elliptical trainer, looking at the pros, cons, and how it compares to other ellipticals for home gyms.

It’s the best elliptical trainer on the market for people who want the ultimate in terms of adjustability in foot position and incline.

The Sole E95is also relatively budget-friendly at under $2,000 when you see how feature-rich the elliptical is, particularly when compared to more expensive trainers.

In this review, we will look at the pros of the Sole E95 Elliptical, where it falls short, how it compares to other ellipticals for home gyms, and much more.

By the end, you will have a crystal-clear idea of whether or not the Sole E95 is the right one for you.

What is the Sole E95 Elliptical Trainer?

Let’s start off simple: the Sole E95 is the most feature-rich elliptical made by Sole Fitness.

Although less expensive than some of the other premium ellipticals made by Life Fitness, Star Trac, and NordicTrack, it more than pulls its weight in terms of versatility and features.

Who is the Sole E95 Elliptical Trainer for?

The Sole E95 is for people who are experienced with ellipticals and want total control of foot placement and pedal incline when working out.

Although pricier than many ellipticals for home use, the E95 is actually a steal when you consider all of the added features including adjustable handles, variable stride length (on the E95S–more on the that later), and exceptional stability.

The Sole Fitness E95 Elliptical is for the home gym enthusiast who wants the best elliptical for the money.

While there is a long list of things that are great about the Sole E95, there were several things that REALLY stood out for me and made the E95 stand apart from other ellipticals.

1. Resistance controls are built into the handles.

One of my favorite ways to train on an elliptical is HIIT workouts.

When short on time, nothing beats the high output and better results of interval training. For people who want to manually control the resistance levels, and not use the onboard HIIT programs on the console, having to release the handle while using the elliptical can be frustrating and even unsafe when going at full tilt.

The E95 solves this by having controls for resistance levels on the molded handles.

This is awesome news for those of us who like to increase the resistance (and decrease it) mid-workout almost instantly and without letting go of the handles and breaking stride.

The foot pedals on the Sole E95 are one of the things that really make it stand apart from other ellipticals on the market.

For starters, the pedals allow you to select from different ten different angles for the pedal.

This is excellent news for people who want to customize their foot position and reduce some common issues like a foot or toe numbness, which happens a lot with ellipticals from constant nerve pressure on the toes and feet.

(Pedaling backward is also a great way to reduce the likelihood of toe numbness as it changes the way pressure is placed on the feet when using the elliptical.)

3. Standard programming plus studio programs with thousands of classes.

The Sole E95 comes with your basic workout programs—steady state, HIIT, and so on. For an added $20 a month, you can also join STUDIO, Sole’s online workout service.

Online classes for home gyms have become all the rage, popularized first by Peloton and then adopted by other gym equipment manufacturers.

Sole Fitness for a long time were the “old school” elliptical of choice, but they have also jumped on the bandwagon and unleashed their own library of classes, with over 3,000 (and counting).

The production value isn’t the same as Peloton, but it has a lot of the same features that make Peloton’s classes so fun and addicting, including community leader boards, new classes, and lots of instructors and classes to choose from.

The $20 a month for online classes is also cheaper than alternatives like Bowflex’s JRNY ($29.99 per month) but more expensive than NordicTrack’s iFiT ($180 per year).

The E95 (and it’s big brother, the E95S), utilize a whisper-quiet drive that incorporated a double rail system that is WAY smoother and quieter compared to single-rail ellipticals.

One of the most frustrating things I’ve seen with ellipticals, whether it’s the Star Trac models at my local gym or the more budget-friendly ellipticals (which is code for “cheap”) is rail systems that “catch” and start to clunk after extended use.

Above all of the bells and whistles that come with the E95, including the built-in fan, speakers that can play music from your smartphone, holder for tablet/smartphone at the top of the display, and a USB port on the console, the elliptical is hilariously stable.

The Sole E95 weighs a hefty 236lbs, which means it’s not going to sway, teeter, and wobble when you are exercising on it.

Whether you are doing your favorite elliptical HIIT workout or doing long steady-state cardio, the E95 is not going to rock when you are working your butt off on the machine.

Although there is a lot to love about the E95, there are a couple of things that could use some improvement.

The display is a bit basic

The LCD display is a little bit basic compared to the other HD displays. If you are used to the rich and HD displays of a Peloton, you might be a little disappointed with the screen on the E95.

At the end of the day, the display isn’t really the main feature of an elliptical, and for the purist or minimalist that just wants to get on the elliptical and sweat their brains out, this won’t be much of an issue, but it’s something be aware of when dishing out between $1,699 and $2,199.

What’s the difference between the E95 and the E95S?

The Sole E95S Elliptical has all of the features of the E95 but adds on an adjustable stride length, allowing users to select a stride length between 18” and 24”.

This is the longest stride length available of any elliptical on the market.

The Sole Fitness E95 has a 20” stride length that comes standard and cannot be adjusted.

The E95S has a slightly heavier flywheel (30lb vs 27lb), the overall unit weight differs significantly, with the “S” weighing almost 30lbs heavier than the E95 (265lb vs 236lb).

What makes the E95 different from other Sole Fitness Ellipticals?

The Sole Fitness line of ellipticals cover a wide range of budgets and exerciser needs.

The E25 is the entry-level elliptical in the Sole line, and the E95 (and the E95S) are the “heavy-duty”, premium models.

Differences include stride length, flywheel weight, size of the LCD display, and the overall weight of the unit, which contribute to stability when using the machines.

Here is a comparison of the key features comparing the Sole ellipticals:

Sole Fitness is one of the sneaky brands when it comes to cardio machines and exercise equipment.

Even though they aren’t as well known as the other big cardio brands like Nautilus, Life Fitness, Cybex, Bowflex, NordicTrack, and the like, Sole is hands-down the best maker of elliptical machines (and have been king for nearly two decades).

The Sole Fitness E95 Elliptical is the best overall elliptical for home gyms. The price tag is a bit hard to swallow for people on a budget, but the quality build and added features will pay for itself, both in longevity and added workouts over the years. 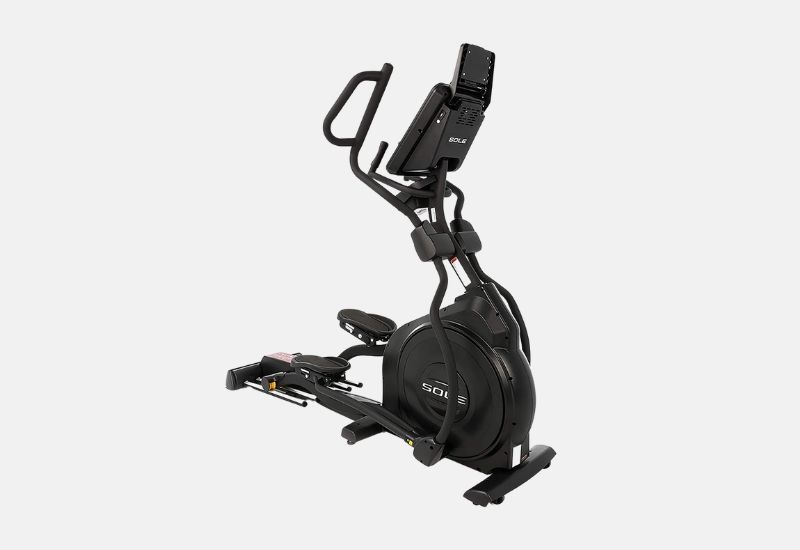 + Best elliptical trainer on the market

How Much Do Ellipticals Cost? (44 Different Models Compared). Ellipticals can be a costly investment into your workout goals. Here is a look at how much each type of elliptical costs and how much to spend on one.

Sole E55 Elliptical Review | Pros, Cons, and Hands-on Experience. The Sole Fitness E55 Elliptical is an industrial-grade elliptical machine for home gyms. Here is a full review of this tank of an elliptical, including its pros, cons, and how it compares to other elliptical trainers.