Rogue Fitness makes some of the best quality training and competition gear in the whole wide world.

Whether you are using their competition Olympic barbell or this absolute beast of a leg press machine, Rogue’s commitment to excellence and bomb-proof construction is obvious.

Assault bikes are a little trickier as they have a lot of moving parts. They require significantly more maintenance than a set of dumbbells or even a power rack. 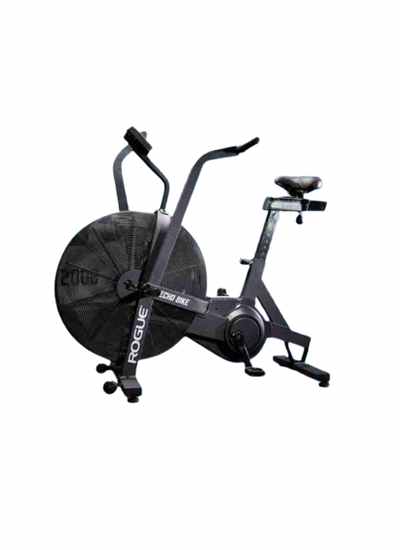 + Best air bike on the market

+ Most stable air bike on the market

Rogue’s Echo bike, which uses a belt-driven steel fan system, takes a lot of the maintenance and upkeep out of the equation, giving you an air bike that works like a monster and can be generally left to its own devices.

Here’s a deeper look at the Echo, how it compares to the other best air bikes on the market, and where you can pick up your own.

Let’s get right into it.

The AssaultBike, made by Assault Fitness, was the first big assault bike on the scene. Nearly every gym across the country had one, and this was the bike of choice for most CrossFit competitions, including the Games.

Even though other bikes have come on the scene, including offerings from Bells of Steel, Schwinn, Concept 2 and of course Rogue, the AssaultBike remains popular.

Why does this difference matter?

Chain drives require frequent maintenance. Greasing, oiling, and of course, making sure that it stays on and is aligned properly. The belt on the Rogue Echo is hands-off when it comes to proper tensioning and maintenance.

So while the experience of training on the two bikes is largely the same, it’s the maintenance and durability where the Rogue Echo really shines.

There are some other minor differences between the Echo and the Assault, namely that the Rogue is built like a total tank.

The Echo is bigger (50lbs heavier) and has a wider base, making it feel sturdier. Rogue makes tanks designed as fitness equipment, whether it’s their line of dumbbells or flat weight benches.

Rogue’s commitment to over-building is one of the reasons I love their stuff so much. Nobody wants to buy an expensive piece of fitness equipment and worry about durability.

Additionally, the Echo is one of the few assault bikes on the market that has a fan that is made completely of steel.

Price-wise, the Echo is in the same ballpark, costing $800 (check for current pricing and shipping options at Rogue’s website).

The additional cost balances out in the long run when you factor in the reduced maintenance and sturdier build.

There is a lot to love about the Echo.

Here are some more reasons that it’s my top-rated assault bike.

✔️ LCD display. Track your power output, time spent working out, and much more with the LCD display that can be customized to your training, whether it’s HIIT (my favorite workout on the Echo is blasting away rounds of Tabata) or slower-paced recovery work.

The display pairs with some of the more popular heart rate monitors (sold separately) like the Polar H10.

The Echo Bike is my favorite machine for HIIT workouts, and it will make an athlete out of you with all of the programming options in the LCD display.

✔️ Adjustable seat. I have a weird body—a long torso, long arms, short legs while also being tall. Sort of like a tall guerilla, which makes getting a good fit on a bike challenging.

The Echo’s seat is adjustable up and down for a good, comfortable and custom riding experience.

✔️ Long list of additional options. Tweak your Echo with a range of add-ons include a wind guard, a holder for your smartphone, bottle cage (not compatible with larger 32oz water bottles like Nalgene or YETI).

✔️ Rubber coated feet. The base of the Echo has rubber-coated feet and legs to keep the bike planted firmly on the ground and helps avoid sliding and rocking when working out.

✔️ Metal fan and metal clips. The fan is made of steel—one of the few bikes that feature this—that spin smoothly.

The pedal clips are also full metal (you can select Shimano cleats as an add-on during the checkout process on Rogue’s website as well).

✔️ Heaviest assault bike on the market. The Echo weighs a staggering 127lbs. Once set up, it’s not going anywhere. The wide footprint on the Echo also reduces wobbling while hammering away on the bike.

✔️ Hot wheels. Under the fan are a pair of wheels that make moving the Echo a breeze (ha—see what I did there? Fan… breeze…good stuff, right?).

Wheel it out when it’s time to go to work, wheel it back into the corner of your home gym when you are through.

✔️ 2-year warranty. In the event of a defect or break, Rogue backs the Echo with a two-year warranty from the time of purchase.

❌ Single grip option. The only complaint that I have about the Echo is the limited options for grip placement. The handles are horizontal, giving you only the option of an overhand grip. For people who prefer a hammer grip, you will have to look elsewhere.

+ Best air bike on the market

+ Most stable air bike on the market

How much does the Rogue Echo Bike weigh?

The Rogue Echo Bike weighs 127lbs, making it the heaviest air bike on the market.

In comparison, the Schwinn Airdyne 7 weighs 113lbs, the Bells of Steel Blitz weighs 120lbs, and the AssaultBike Pro weighs 118lbs.

The added weight of the Echo makes for a sturdier design and a less wobbly ride when in use.

The main part of the bike, including the belt drive, fan, and the main frame of the Rogue Echo Bike comes fully assembled.

There are several parts of the bike you will need to fasten and attach to the main frame of the bike.

(1) Front and rear feet of the bike

(3) Threading the pedals onto the frame

(4) The two handle arms, which are screwed into place by the foot pegs.

And that’s about it!

Rogue also ships everything you will need to put together the bike—no additional tools are required.

How long does it take to assemble the Rogue echo bike?

It takes about thirty minutes to assemble the Rogue Echo.

Part of the assembly time is unpacking the bike, which is shipped bracketed in thick Styrofoam and wrapped with industrial-grade clear wrapping to prevent damage in traffic.

The remainder is screwing in the components, including the front and rear foot stabilizers, threading the pedals, and installing the console and handle arms. If you have experience putting together fitness equipment, you can probably even do it faster than 30-minutes.

How loud is the Echo Bike?

The Rogue Echo Bike—and this goes for all air bikes—create a lot of noise and vibration as they are pushing so much air around.

When pushing the pace on an Echo bike, expect the sound to be the equivalent to a large industrial fan (because that is essentially what is inside the wheel carriage on the bike).

Although air bikes are generally loud, the Echo gets bonus points for utilizing a belt drive which is noticeably quieter compared to chain-drive bikes.

Is a Rogue Echo Bike worth it?

The Rogue Echo is an exceptional piece of training equipment. That said, it’s not inexpensive.

It retails for around $850 which can be pricey or simply not worth it for the more casual or recreational lifter or athlete.

But for those who are serious about increasing their conditioning levels, burn a whole bunch of fat, and increase athletic performance, the Echo Bike is simply the best built option for training with an air bike.

One more thing to note. The Echo Bike holds its resale value really well. I frequently catch Echo Bikes on Facebook marketplace selling for prices that match or even exceed retail.

For most athletes, the Echo is a no-brainer.

Whether you are doing interval training or slow and steady cardio, it’s the best-built assault bike on the market, requires the least amount of maintenance, and will take all the punishment you can throw at it.

When considering the right assault bike for your home or garage gym, the Rogue Echo is hands-down my top choice.

Air Bike vs Spin Bike: Pros, Cons and Differences. Curious about the differences between assault bikes and spin bikes? Here’s a detailed comparison, including pros, cons, and differences of both.