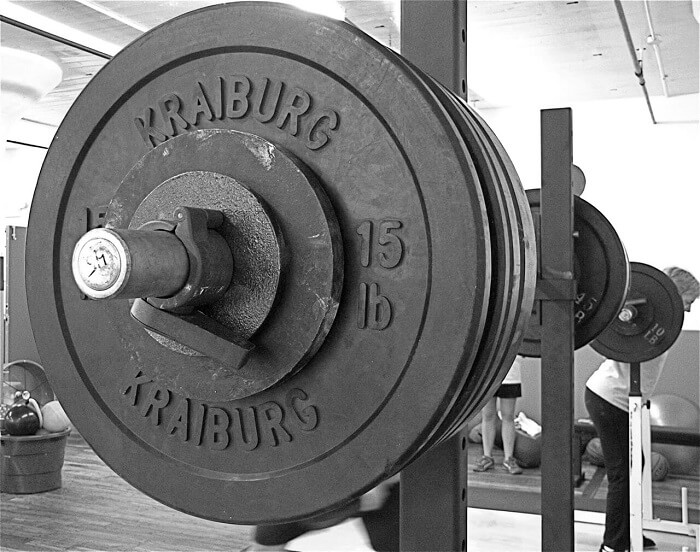 “I walk slowly, but I never walk backward.” – Abraham Lincoln

I had a frank and revealing conversation with a friend recently. She is trying to get back in shape, and has made several fitful attempts at regaining the conditioning and form she held as recent as a year ago.

She described how things usually go:

A setback, falling ill, missing a workout, a lack of progress—all of which lead her to feeling like the work she has done to that point is for nothing.

So what’s the point?

A few weeks or months later the cycle starts again. And around and around we go. Never getting out of first gear, feeling like the process is stacked up against you.

As a youth I had the benefit of being enrolled in sport, that more or less I had to attend (fortunately I liked my chosen sport). But soon as the structure (and obedience) was removed in my early 20s, and training every day wasn’t a mandatory part of my life (and goals), the excuses and the weight began to pile up.

Over the subsequent years I would have periodic streaks of consistent workouts. A couple months at the longest, the occasional single the shortest. Just enough to keep modestly healthy and functional in day-to-day life.

But I was never consistent enough to achieve anything substantial.

Over and over I would go around the circle of minimal gains, convinced that my “all-or-nothing” attitude was the only way I could approach my workout goals: 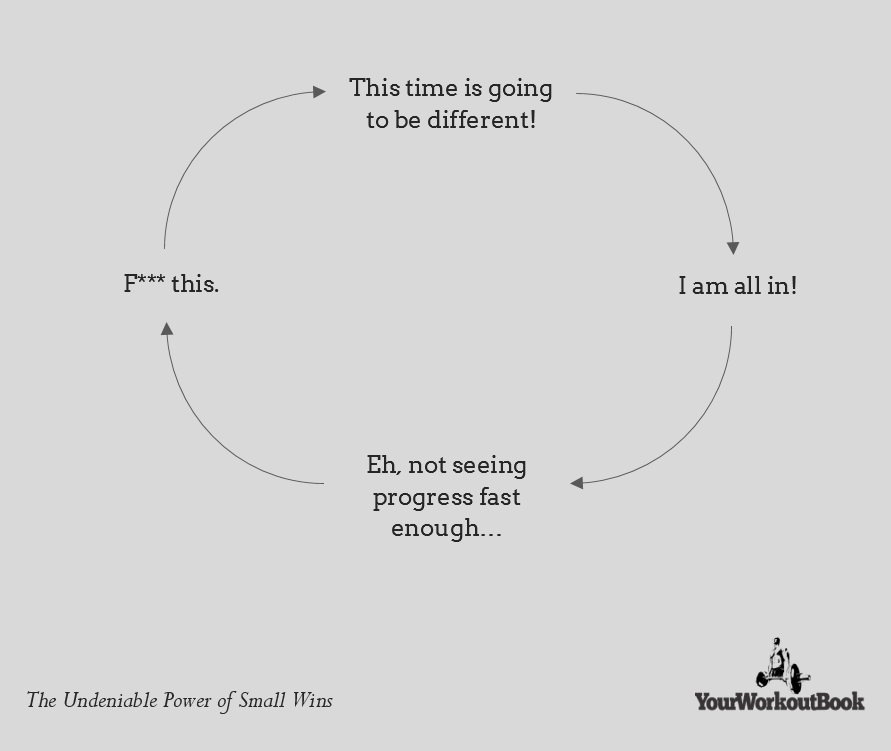 It wasn’t until a couple years ago that it clicked for me.

After a particularly long absence from the gym I started back at it.

The only difference being—and looking back now I realize how smart of a move it was at the time—that I completely suspended expectations. The goal became solely making it to the gym. Nothing more, nothing less.

What I did when I got there wasn’t nearly as important as the fact that I was there.

“All or Nothing” Does Not Work

The attraction to all-or-nothing thinking is understandable. And tempting.

It looks great from the outside—we make a commitment so unbelievably powerful that it bulldozes over our past and present behaviors and habits—but this type of stop-or-go thinking leads to rather spectacular flame-outs.

Just like you wouldn’t stomp on the gas pedal of a car that had been sitting out in the freezing snow all night, nor can you expect to upend your life in one spastic, albeit well-intentioned commitment.

So if going all-in with your workout goals is so tough, does that mean we are destined to remain where we are? Resigned to achieving below our potential?

Enter the giant slayer, the destroyer of goals—small wins.

In 2011 Steven J. Kramer and Teresa Amabile wrote an illuminating piece for the Harvard Business School revealing the number one predictor for worker satisfaction. When over 12,000 worker entries were pored over, they found that employee motivation and engagement was based on whether they had achieved something worthwhile that day.

It was the simple act of making progress in work that the employee considered meaningful.

They also found that for something to be meaningful and motivating the task didn’t have to be huge. In fact, often it was the simple pleasure of completing a small step forward on a project that instilled a sense of happiness and motivation.

Which makes sense, because when you consider that small wins do the following:

They make you feel good about what you are doing. Want to talk about a powerful feedback loop? How about one that continues to keep you going long after the first surge of motivation has passed? If each day you are walking into the gym and making a slight, yet meaningful step toward your goal, you are going to feel good because progress is being made. And when you are feeling good about what you are doing…

The more often you experience it, the more likely you are to continue. Consistency and discipline is tough. You don’t need me to tell you that. No matter how motivated and jacked up you are at the beginning inevitably the excitement is going to wane. But if each time you walk into the gym and get that hit of motivation from taking another step forward, it will reinforce what you are doing, helping you to get back to the gym tomorrow. And the day after. And the day after that.

Small steps of progression are totally doable. A big barrier to change is the scope of what we want to accomplish. Want to lose 50 pounds? Add 150 pounds to your squat? Become Batman? Where to even start? The task seems enormous from the outside looking in. But if you make it about doing a couple little things correctly today (and today only!), suddenly it doesn’t seem so overwhelming.

Small wins make habit-building a lot easier. Adjusting old habits and creating new ones is tough. Really tough. And they require a long amount of time in order to create automaticity. (How long, on average? Over 60 days.) But when you are starting small, with little, digestible steps it becomes a whole lot easier to bang out a whole bunch of days where you execute your mini-habit.

Small wins create an environment for big wins. Those big, greasy “Whammy!” moments where you suddenly add 25 pounds to your bench press PR are made possible with the consistent application of small steps of progress. The big breakthrough moments are awesome, but they are super infrequent and hard to predict. It’s the days in-between, the ones where you take small and meaningful steps that set the stage for the big strides.

“But I’m starting from the bottom.”

Starting from rock bottom, of being forced to be humble about where you are at, is possibly the biggest advantage when getting back in the gym.

Because it forces you to suspend expectations.

It can be easier to be willing to take it slow and to be patient and trust the process when you know it is going to take a while to see any real progress. Starting from rock bottom forces you to be a little more realistic about what you are capable of by that point.

The cumulative power of small wins is hard to see over the long term. Even if you subscribe to this system, and adhere to it for a couple weeks, we aren’t going to achieve exceptional results during that period.

And yet, flash-in-the-pan efforts clearly don’t work. And still we cling to the belief that it is the only way forward.

The concept of small steps can be difficult to absorb because they lack the punch and instant results we have conditioned ourselves to crave. We want the results to happen the moment we make the commitment. But, as we all know, that’s not how results come to pass.

And yet, this empty, misleading and discouraging set of expectations remain. (Yet another reason that perhaps goals aren’t the things you should be focusing on if you are keen on long term success.)

But the good news is this—small wins create a sense of optimism and confidence that is disproportionate to their size. Which is just the thing you need in order to keep yourself consistent and disciplined in your workouts.

“Small steps are beneath me.”

We all like to think that we are the exception. That we can be the one to summon a Herculean amount of willpower and discipline and be able to wield it effortlessly and consistency in pursuit of our goals.

It’s tempting to think that we are above taking small steps or achieving small wins on a daily basis, dismissing them as only for people who suck at goals or who don’t want it as badly as we do.

Aiming for small wins shouldn’t be viewed as weakness, or as a shot to your pride.

They work. At the end of the day, that is the only thing that really matters.

Baby stepping forces you to temper your expectations.

We are brutal in terms of predicting how fast we can progress. Seriously. Goals are typically listed out in absolute best case scenarios—“If I go to the gym every single day for the next 200 days I will gain 50 pounds of muscle!” which are impossible to sustain.

After all, goals of any reasonable length will incur their share of setbacks—illness, injury, family emergencies, and so on.

While we are taught to dream big, small stepping forces you to stay focused on the process and on building a routine that will carry to your goals without having to stress endlessly about whether or not you will achieve it.

In other words, small steps help make the routine the goal.

Putting it all together

A couple thoughts in closing.

Small steps are relative. A small step for an ultra-marathoner is going to be different from someone who has been completely inactive for the past decade.

Small steps work wherever you are currently at.

If you find yourself falling off or having a hard time keeping the steps consistent, the rule is to restart smaller.

So small that it has no choice but to stick.

Only then do you ramp up the effort.

In order to unleash the power of small wins spend a couple minutes journaling your work in the gym. (Or in the kitchen, if that is where your goals lie.)

Grab a pen and a piece of paper and spend a few minutes after your workout going over the aspects of your training that make the most difference to you. Fire off a couple notes about the things that powered or hampered your performance that day, and then make a small plan for tomorrow.

Rinse and repeat enough times, and you will find yourself crushing your goals in the gym without ever really having to think about them.