Pat Riley is one of the greatest coaches in NBA history. Here is what leaders, coaches, and players can learn about attaining greatness from Riley’s revered book on leadership, The Winner Within.

Pat Riley is one of the coaching legends of professional basketball. He coached the Showtime era Los Angeles Lakers to four NBA titles during the 1980s and a fifth with the Miami Heat in 2006. He has won titles as a player, head coach, assistant coach, and as an executive.

His book, The Winner Within, encapsulates his coaching philosophy. Published in 1993 while Riley was head coach of the New York Knicks, The Winner Within is a leadership book for coaches, business executives, and athletes.

Well-written, and with a friendly yet authoritative style, Riley illustrates his leadership and coaching philosophy through a series of examples, both from the business world and from his coaching and playing days.

The Winner Within is an excellent resource for anyone who is seeking to tease out more excellence and mastery from their lives, whether it’s in their personal relationships, on the basketball court, or in the boardroom.

Here are some of my favorite takeaways from Riley’s coaching and leadership classic, The Winner Within. 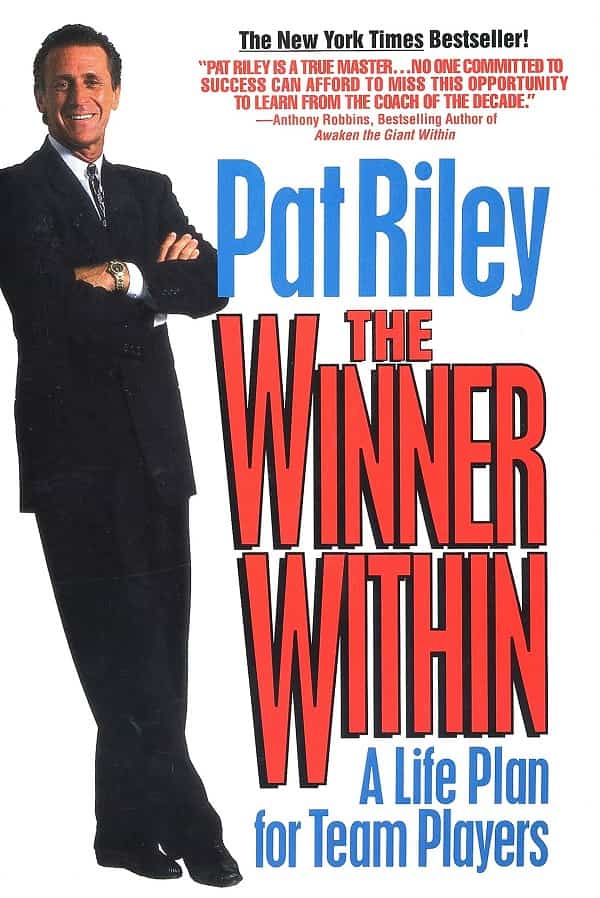 Where to Buy The Winner Within by Pat Riley

The role of teamwork extends far beyond the court or field. Whether you are trying to achieve excellence in sport, business, or in your personal life, teamwork is at the core of organizational success.

Although teamwork can be easy to see or feel, it is hard to mechanically describe.

Suppressing territorial ego is what leads to a cohesive team. Although this can seem like a sacrificial choice, as though you are giving up what you expect and believe to be yours, in the end you are gaining.

Innocence takes time and experience to be effective. And innocence is not the same as naivety.

Winning happens when you help everyone else play at their best.

Exceptional leaders go out of their way to elevate the performance around them. They are willing to step back from the spotlight, step aside their ego, and see the grander vision and possibility in helping others excel instead of focusing solely on their own performance.

Exceptional leaders work with the strengths of the team members and adapt their own approach, playing to maximize what team members do well.

Magic understood that by making elevating the game of others the priority, his teammates would get inspired, overall performance would go up.

“The Disease of Me”

Although the road up the mountain is tough, winning brings its own set of challenges. Typically, it’s the ego of the player taking center stage, opening the door for The Disease of Me.

While the symptoms of Disease of Me are exemplified in Riley’s Showtime Lakers of 1980-1981, where the team fell apart after winning an NBA title the year before, the symptoms hold true when it comes to business and relationships.

Here is what the Disease of Me looks like:

You should always be learning.

Win, lose, on the bench, or starting, become a master of your craft even when you aren’t the center of attention.

Improvement happens in the countless moments between the bright lights—choosing to make the most of them is an attitude and a choice you have to make.

The final hurdle to success is complacency.

Entitlement and complacency creeps in the door the moment success begins to happen.

Where to Buy The Winner Within by Pat Riley

Best Sport Psychology Books: Conquer Your Mind, Conquer the Competition. Want to sharpen your knowledge of sport psychology? Here are some excellent resources for anyone looking to level up their sport psych knowledge.

Lead Like a Champion: Essential Reading for Coaches. Excellent coaches are not only excellent teachers, they have systems and routines that produce excellence and “natural” leadership. Here is a selection of the best books for leadership-minded coaches.